The indelible seasons of Curryosity

For better or worse, its curious spice blends stand out

Given a healthy appreciation for good puns, South Asian cuisine, and proximity, I was more than curious when Indian restaurant Curryosity opened close to home in South Park last fall. It gave a good look to an intermittently vacant restaurant space that needed it. The dark storefront received a bright white paint job, with saturated splashes of pink and gold and a sign that declared Curryosity would be, “spicing up the neighborhood.”

Visions of Indian takeout danced through my head, of fresh naan and lots of aromatic leftovers rotating through my refrigerator. Then I saw the vibrant interior, elegantly furnished, with colorful artwork and stained glass pendant lamps, and realized the space offered a sort of dine-in experience the entire east side of Balboa Park has been craving. A large, open window counter and patio dining open the bar area to the sidewalk along Juniper Street, effectively settling the matter: it looks every bit a boon to the community. 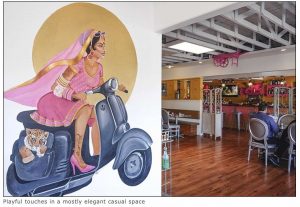 The seed needs to be soaked in an inspiration shower (patent pending). I hunt the interwebs for cool UI patterns and archive them in a massive Photoshop file. For example, when working on YouTube TV I grabbed hundreds of examples of future UI from futurists like Jayse Hansen and Neil Huxley.

Tiny women carry amazingly large bags, twice their eighty-pound weight. Some of the women carry babies in slings around the front. A good adult picker can harvest over two hundred pounds of cherries and earn $8 a day, more than twice the Guatemalan minimum daily wage.

Compel your audience. Capture the moment. Light with purpose. If a picture is worth a thousand words, what’s a talking picture worth?

New Avatar of Indian cuisine with a mix of California style. Our Curryosity Family takes pride in ensuring our products are made with only the best ingredients and they will make sure your plate arrives from the chef’s table to yours in highly pleasant to the taste. We’ve stayed committed to keeping the best ingredients possible in our dishes to give you the highest quality dishes at Curryosity. At this home away from home, Raj Mutti crafts balanced feasts with flavors for all. Signature dishes include Curry mussels, Curry fried, Naan smoked salmon, Spiced Crab cake, Green coconut curry, Deconstructed samosa, Samosas stuffed with mozzarella cheese & spices, Curry Nirvana made from a mixture of authentic spices with chopped red onions, bell peppers & fresh coconut; with your choice of Chicken | Fish | Shrimp | Paneer | Veggies |Tofu.

Along with comfort fusion and classics, Curryosity has developed a craft cocktail selection known as the Dessert Bar. The menu provides a boozy spin on dessert favorites with highlights including Chocolust prepare with Luxardo Maraschino Cherries, chocolate bar wine, mango mousse and Not your Average chai cocktails.